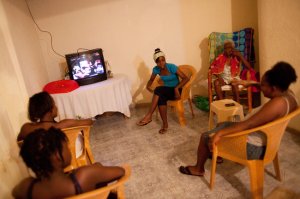 “Regards Croisés,” which translates roughly as “Viewpoints,” has been on the air a little more than a year and is a runaway hit with middle- and working-class Haitians who live, as people in the capital put it, “down the hill.” The show’s improvised skits, which feature all-too-familiar character types — the ill-trained schoolteacher, the mercurial embassy consul — gently send up Haitian daily life, particularly the class divides and crushing hardships that

make so many Haitians desperate to get out.

The Pros and Cons of New Development in Haiti

Braving the heat, Fanilia Prospère took a break from pushing her wheelbarrow of imported used clothing to look around. Then she smiled.

In Haiti, where so many promises of change turn to dust, the evolving landscape was worth the moment of contemplation: warehouse-sized factory shells rising from fertile soil, bulldozers rumbling distantly as they cleared farmland to build hundreds of homes and unemployed young men chattering under a mango tree about the change that was coming to Caracol.

For the bucolic but impoverished fishing village on Haiti’s northern coast, the sight of foreign dollars creating new housing and jobs is filled with hope — and worry that the multi-million dollar investments also will spawn the all-too-familiar slums.

“It is almost certain,” said Jilson St. Tilien, as he watched a game of dominoes under the tree. “People need to make a living and they will move here to do so.”